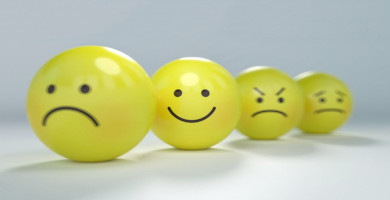 World Emoji day is a fantastic time to consider the current state of the worlds linguistics! Sound boring as hell? Bear with me.

As we review the advancement of language both verbal and written we are able to better understand the extraordinary evolution of the human brain! Our ability to reason has allowed us the capacity to create seemingly impenetrable nations, and it is important to note that the development of our language has grown parallel with the the development of humankind.

There are currently around 5,000 different languages spoken in the world today, 1/3 of which are in Africa alone. However, they each of these linguistic groups have all descended from one 'original language' which is thought to have been spoken as close as a few thousand years ago.

When we think of the first humans, most minds go way back to the cavemen. We picture the predominant use of grunts and 'ugs' in communication. However one fascinating early use of communication in this period of time was that of cave art. It is thought that this cave art was not necessarily just cavemen expressing their inner feelings on a blank canvas as artists nowadays are known to do...instead it was a source of communication. It was an early form of writing!

Now, I am sure you are aware that we didn't go directly from Caveman drawings to Shakespeare...there were thousands of years of evolutionary steps that got us there! 5 of these steps I wanted to highlight! (I know I know...it is so interesting!)

1) Tokens as precursor of writing -

Originally one of the first forms of writing was the use of Tokens. These tokens were made of clay and created in a multitude of different shapes. These shapes (tokens) were used to document and keep track of goods, mostly used within trading/bartering.

The use of tokens led naturally to a transition from said tokens to script...aka writing! in around 3500 BC tokens would be held in envelopes until payment was made. To give an indication as to what was in the envelope, some accountants would impress the tokens on the surface of the envelope to indicate the shape and tokens that were held inside.

3) Logography: A shift from visual to aural -

Logography - the Marketing nerd inside of me is so excited by this word! Marketing has essentially been an integral part of business transactions for thousands and thousands of years! Logos would be used to represent the particular manufacturer or individual's goods so to differentiate them from others. Us Marketers are ancient!

In writing, logography is 'a written character that represents a word or phrase'. A big (GIANT) step towards written language as we know it today.

It is thought that the original alphabet was created around 1500 BC and consisted of 22 sounds.

The alphabet was only invented once. All alphabets thus derive from the proto-sinaitic alphabet, but have evolved and progressed accordingly, to become the varied alphabets that we know and love today.

This has been a very quick and a very sped up version of the history of written language. We have come such a long way over the last, how ever many, thousand years. From using tokens in trading, to using different early forms of writing to keep track of goods. From using writing to keep track of dates and historical events in forms such as Chronicles, to using writing as a form of expression; to using it as a source of entertainment and communication with friends, family and others. Writing and language have played such an integral part in the advancement of life as we currently know it, we surely cannot imagine a world without it.

Although we have come such a long way it is key to remember that evolution of language has by no means stopped. Language continues to evolve across the globe! For example, Pidgin English spoken in New Guinea was originally devised as a practical business language in the 17th century, reduced to the simplest form of language. However it has evolved and developed to become a language in its own right.

Enough of looking back. What is the future for written language? Authors such as Shakespeare, Dickens and Byron have demonstrated the love humankind have for intricate stories and written works, however now in the 21st century, we seem to be moving away from such an intricate use of language and moving back to communication through pictures!

Yes. I am talking about Emojis.

Since 1999 the use of emojis has spread like absolute WILDFIRE! The following definition has even been included in the Oxford dictionary:

As the use of emojis advance, the use of written words are declining rapidly. It is far less common for individuals to put pen to paper when communicating anymore. We contact friends and families via text message; whatsapp; facebook messenger etc. And whilst it is an incredible advancement technologically, there is the chance that we could be losing our written skills! Why would you write an entire sentence when an image can suffice? In a world that values saving time, we run the risk of losing touch with that love for language.

So what are your thoughts on this World Emoji Day? Are we at risk of losing our written skills? Do we run the risk of regressing and going back to communicating via images? Or is this just another fad that is destined to fade out eventually? Pop your thoughts in the comments below.